We haven’t written anything for a while but that doesn’t mean we haven’t been hard at work or hiring other people to work hard!

Last spring we decided that we could not stand our crumbling and peeling front stoop anymore.  The steps got a lot of damage from our contractors bringing in materials in and out of the building and it has probably never been redone since it was built.  As the paint chipped away so too did the materials underneath.

Whenever we used the ground floor entrance debris would rain down on us.  Under the stairs was even worse and the smell can only be described as rat death.  There was a large hole that we filled with rocks to prevent rodents from coming up from what we think was the sewer.  When we first purchased our building we did find one dead rat under there.  If that isn’t gross enough, we found animal bones from either rat carcasses or from chicken bones being dragged into there for dinner.

After our interior renovation they were not looking too good.

Ceiling in the entrance was disintegrating.

We took bids from masons recommended to us from a local Google-group that we belong to.  We checked all of the references of the one that we considered and physically went to see the steps that the front runner completed because we’ve learned our lesson on selecting contractors.

The first step in restoring the stoop was to chisel out the brownstone substance (not really genuine brownstone).  Afterwards it looked like this:

Then they clear that away and put a cement scratch coat that looks like this: 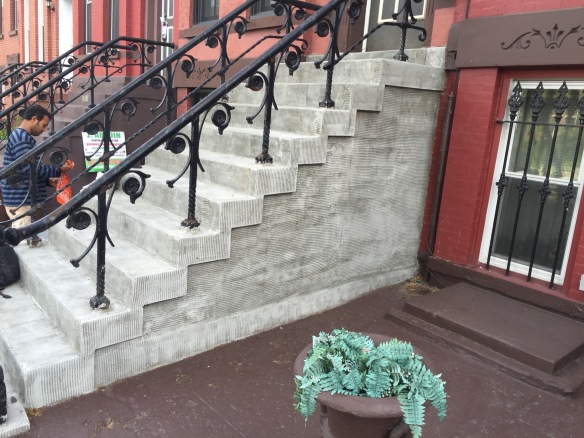 Then we waited until the spring for the cement to cure.  We were fine with this because we had stairs that were not leaking and potentially causing foundation problems, and under the stairs was nice and clean.  This process took about four days total for this stage.

When spring arrived the mason came back to put some test colors on the stairs for us to choose and then they put on the finished coat.  They started in the morning and did a few steps at a time so they would be dry by the time we got home from work.  This stage took about four days. 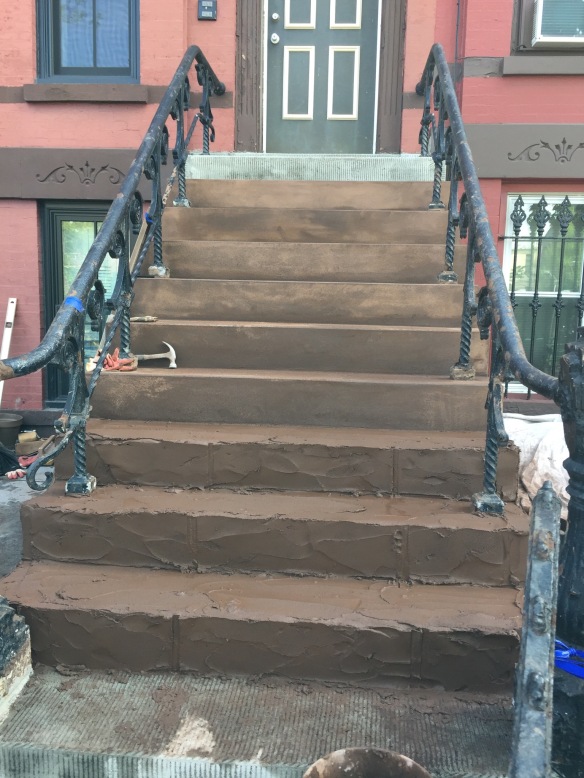 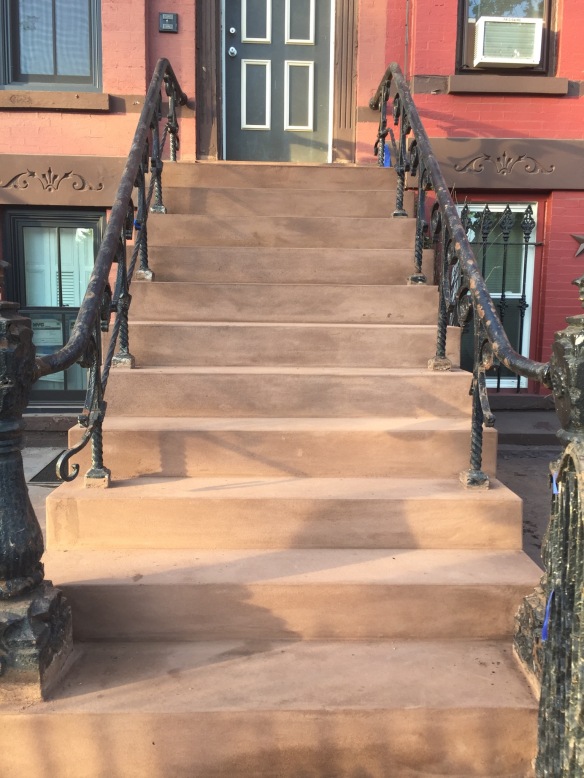 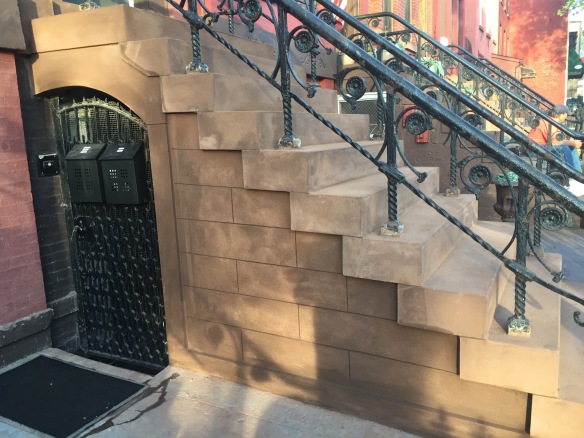 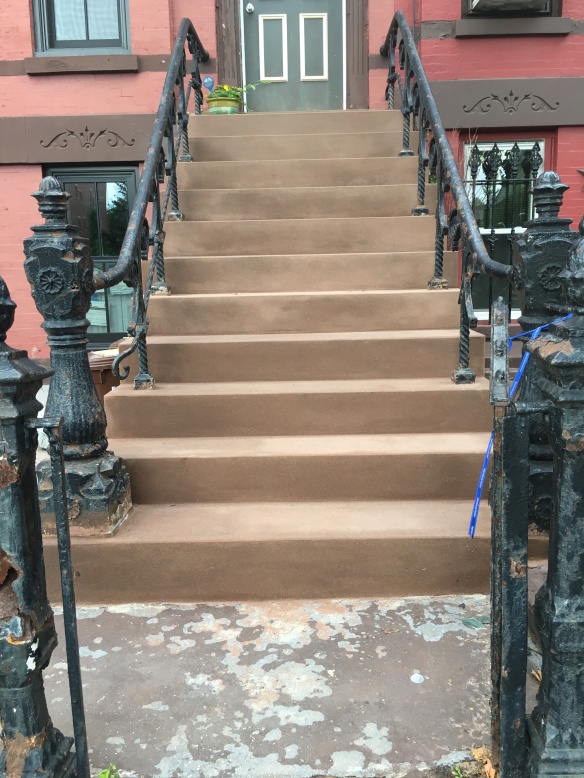 I took this after photo but not at the right angle to see the neighbor’s damage.

We went with the original design of the steps to match the others on the street.After another week they came back and scrubbed and rinsed the steps and now they look great!

The workers also did a pretty good job of cleaning up afterwards.  They did leave our iron window bars that were under the stair out and someone stole them but we’ve yet to have the perfect contracting experience.  If you put anything metal out front in Brooklyn, it might get stolen.

BUT just when we thought it was all done, we got a call from our neighbor who said the workers cause damage to his building.

Our mason said that this area was intact when he left.  The problem with these old buildings is that as soon as you touch something, something else falls apart.  While we had no doubt that it was intact when he left (and we would have noticed this!), the fact that we did this work definitely was the cause of our neighbors section becoming more vulnerable.  We also suspect that the neighbor might have poked the area a bit.

A tip to remember when doing any kind of renovation is to take lots of before photos of your property and any adjoining a neighbor’s property so that you can prove what it looked like before if you have to.

The mason was great and came back and fixed it so everyone was satisfied.

Now we have to deal with wrought iron railings and fence because they look even worse with the new steps.

If you want cost information for a project like this feel free to message us.

We did not get a discount for writing this post but maybe for the next job so please mention that you saw this post!