Architecture in New York City is as diverse as its people.  It is a melting pot of the old and the new.  The NYC Landmark Preservation Commission is (LPC) tasked with preserving aesthetically and historically important buildings, structures, and other objects that make the New York City landscape feel, well, historical.  The Commission was created in 1965 in reaction to the outrage of New Yorkers at the demolition of the original Pennsylvania Station, a gorgeous pink granite Beaux-Arts jewel, that was carried out to make way for the eyesore that is Madison Square Garden.

The Commission preserves not only unique buildings, but the overall feel of neighborhoods that are  designated as historic districts.  A building must be at least thirty years old before the Commission can declare it a landmark.  That being said, we thank our lucky stars that our row house is not in a landmark district because there are lots of extra rules and regulations when you renovate a landmark brownstone.

The LPC website is, however, a great resource if you are renovating a brownstone and want information on how to retain or restore some of your home’s historic detail.  It provides an account of the various styles of rowhouses that have been popular over the last 200 years in the city and breaks them down by style and period.  See its downloadable Rowhouse Manual.

Over the last two hundred years, row houses in the city have been built in a number of styles from Federal (1780-1830) to the English Neo-Classical style (1900-1925), often mixing styles and periods.  Even though it was built in 1899, our modest row house best fits the style known as the Greek Revival, which first appeared between 1830-1860. 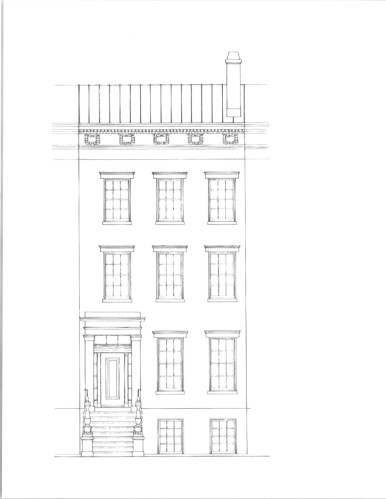 This style was characterized by simple architectural elements that imitated Greek motifs.  Common features included a brick façade, a medium height stoop and wrought or cast iron railings.  These buildings were typically three floors with a basement and sometimes a half-story attic.

The cornices (the fancy edging on the top of the building) were traditionally wood dentiled (derived from the latin dens meaning tooth).

We don’t plan on changing much on the façade for the next couple of years because it is in pretty good shape but at some point we will replace the front windows and either restore or replace the door.

According to the manual, the windows that were customary for a Greek Revival house were six over six double hung wood windows (left).

This was mainly because at that time large pieces of glass were expensive.  While we do like the 6/6 look we may go for the 4/4 instead because, ironically, the small paned glass is now expensive.  Wood framing is also really expensive and is generally special order so we may have to go with aluminum or vinyl.  That debate to come later.

1 thought on “Historical Preservation in NYC”