Once everything was installed and in working order, it was time to finish the room off so that we could actually use it.

Since the back wall of the room is original plaster and somewhat uneven hanging artwork was problematic.  Wallpaper seemed like a good option to give the room some interest.  At first, we thought a mural would be fun but worried it walked the fine line between modern and dated.  We considered some patterns and colors and eventually chose Big Apple by York Wallpaper.  We liked the simple pattern of the repeating buildings and the way it had some depth to give the room a little extra dimension. 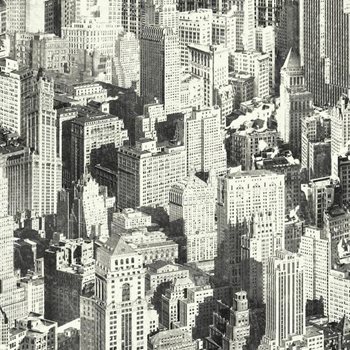 We bought the cream/beige color but there is also one with a blue tone.

Normally, we are DIY’ers but we’d never wallpapered before and did not want to mess it up, and well, we are getting tired. We found an installer on Yelp.  We called a few and, as usual, not many installers were interested in such a small job.  One guy was rude, one guy was out of town indefinitely, the only female company wanted $750 to do one wall! We ultimately chose Jorge, from 78 & Sunny wallpapering.  He arrived on time, put on his headphones, and went to work.  He was efficient, polite and cleaned up after himself.  At this point, we know that is all you can ask of a contractor.  We were very happy with the outcome. 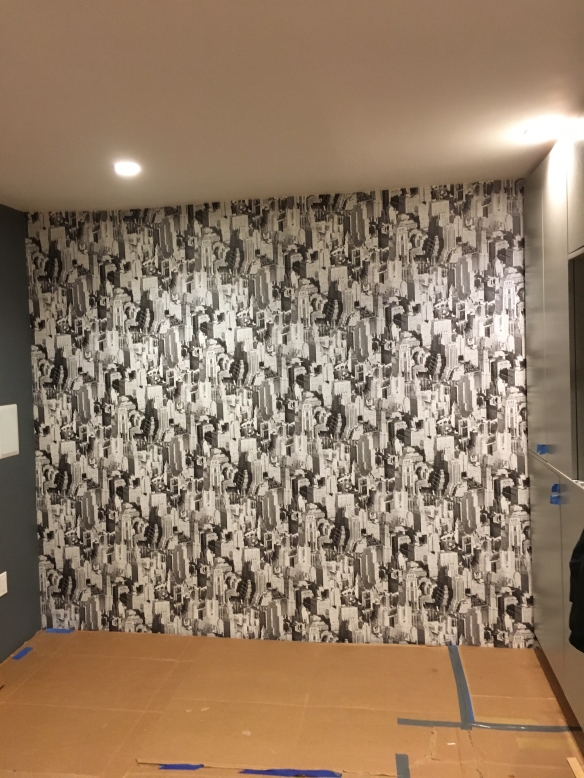 The room is pretty small, especially with the cabinets, so there weren’t very many design/decorating decisions to make.  Our cats like to scratch furniture so we did not want to get an expensive sofa.  We also needed one that we could pull out for guests.  We chose IKEA for the price as well as design and are very happy with the quality so far and at $599, it won’t be such a great loss if it gets damaged over time.  Pillows are also from IKEA. 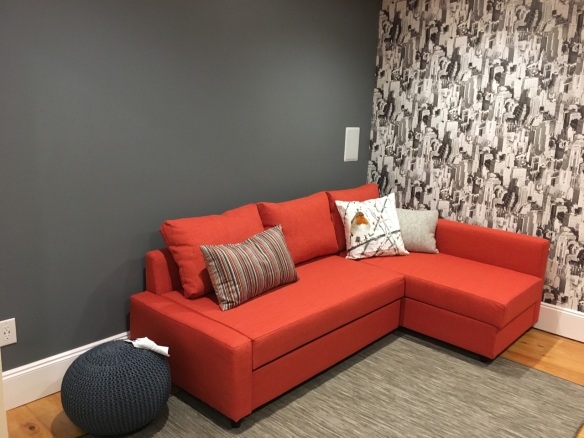 For artwork, we dug through boxes in the basement to find old family photos, original as well as our daughter’s artwork.  For this room, we decided to use only black frames and we also used the Keepsake app to have a couple of Instagram photos printed and framed.  We mixed family photos with artwork and scenery photos taken during our travels to give it a mixture of color and balance.

I wish I could say we had it all planned out before we hung the first photo but we basically started at one end and moved along the wall.   We still have a few spaces to fill but have an exciting trip planned for this summer and will surely take lots of photos.

For furnishings, we finished the room off with two side tables from CB2 and exported a lamp from our living room upstairs.  We also ordered the pouf from Walmart.com to use as a footstool.

We love our new cozy TV/storage/laundry room of requirement!