Early this week our windows were installed and we’re very happy with the results. Unfortunately, not much was done after this but then it kicked back into gear later in the week.

At the week’s end, I went over to work on framing the closet and kitchen walls in the rental apartment. To my surprise there were about 12 guys at the house working on brick for the back of the building and installing the kitchen’s hardwood floors. 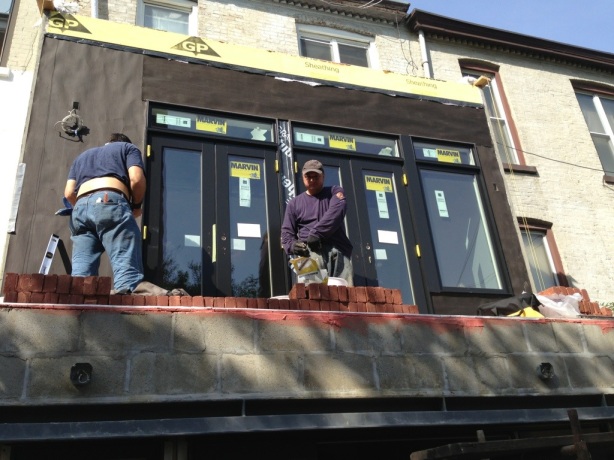 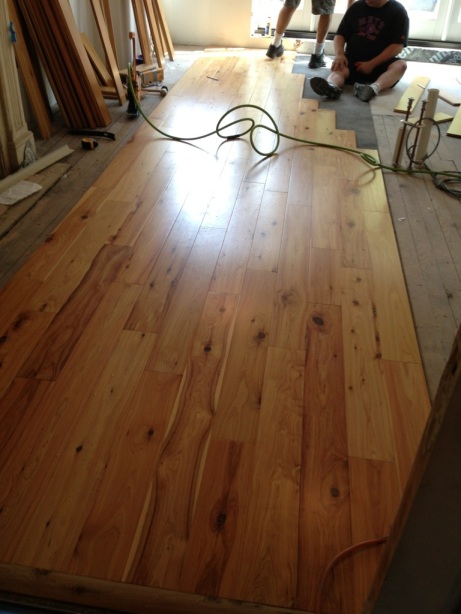 I went about my day working upstairs and talked with the guys a few times and even borrowed some tools. By the end for the day the floor was in for the entire kitchen and most of the brick was up in the back.

The next day, I get a voice mail from my neighbor complaining that the guys are back working again and he can’t have a BBQ he planned because they have a tarp in his backyard (to catch any falling debris). His loss but our gain. The same mason crew was back and finished all the brick.

Inside a pair of guys got started on the kitchen cabinets.

About 70% of our new wood floors from PC Hardwood Floors were installed. 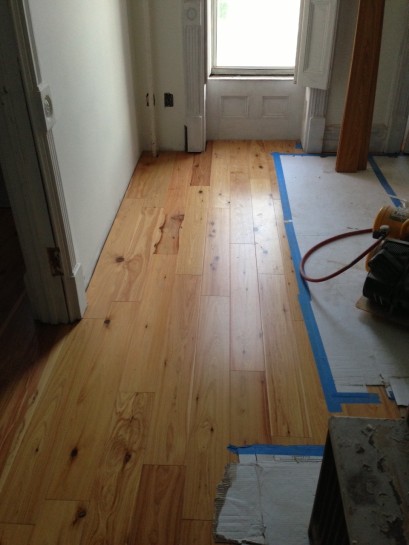 The interior doors arrived and were installed.

The exterior doors arrived and they are the correct doors!  They installed the parlor doors on Friday and they look great. We had no idea there would be any direct sunlight in the back of the house.  The old extension used to protrude and block out the light coming into this room.   Is my husband so excited he’s doing the robot dance?

The bathroom tiles in the master bath were redone and are now straight and the angry inch gone.

The glass shower doors arrived today and will hopefully get installed later this week.  The toilet was also installed but we noticed it is a bit crooked.  We are debating taping it up so the crew cannot doo doo in it.  There is one upstairs on the third floor for them.

The sides of the extension were stuccoed and that means we should not need to go on our neighbor’s property again.

Our front windows (from S & E Building Supplies) arrived and were installed (by Design Tech).  They did a great job and they look fantastic. 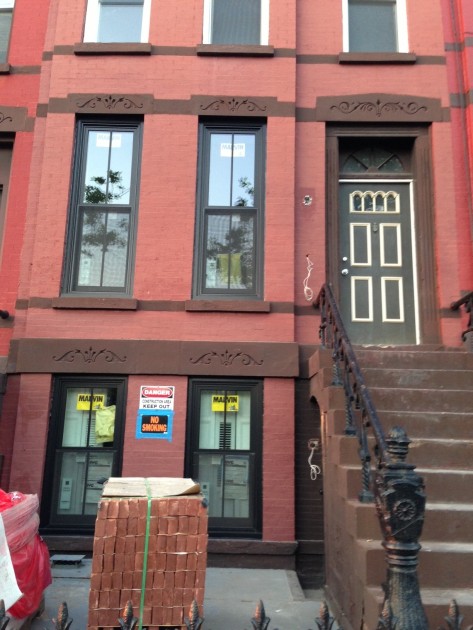 Nevermind the ugly white windows above.  We can’t afford to replace them yet.  Sorry future tenant.  We will get them eventually. 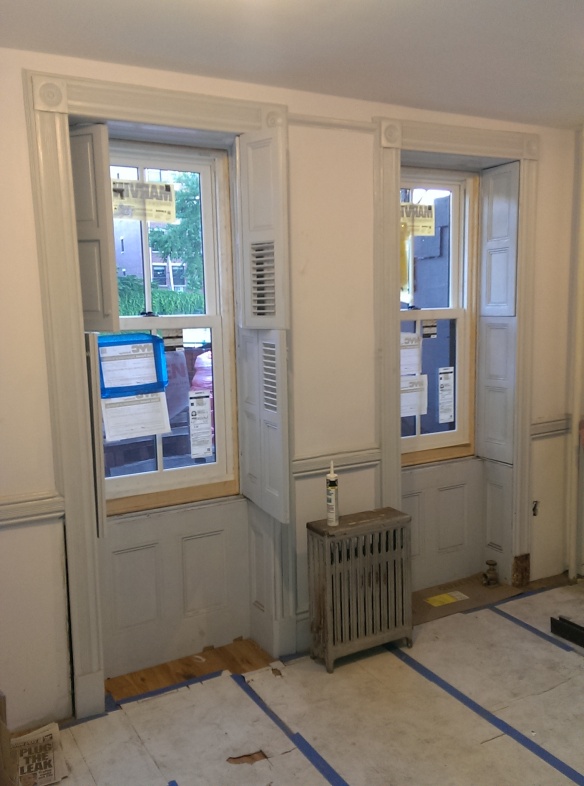 There is still a leak through our ceiling that is preventing them from  re-dry walling the ceiling in the kitchen and master bedroom, which in turn is preventing them being able to finish the floors and do all the other finishing work.  Apparently, the leak is due to the metal channel that ran the width of the building and is protruding too far out and needs to be cut.  We don’t have the whole story on this so more to come.  We may have exchanged one angry inch for another. 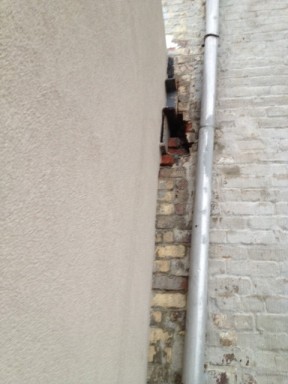 Next, the master bathroom interior door is the wrong door.  We ordered doors with ovolo sticking on them and this door is shaker style.  We are waiting to hear what will be done with that since they really should have confirmed the order before installing or asked us to.  Wrong orders seems to be par for the course in Brooklyn construction.  You really need to inspect your orders.

Still to Accomplish in Next 10 days

In the construction bid our architect specified our interior doors as standard flat panel.  This was something we overlooked when going over all of the many many details of the plans before they went out to bid.  Of course now we want doors with panels, which will mean extra costs.

I can’t say this too often:  Before sending your plans out to bid make sure you go over every detail and if possible have everything you want picked out or at least researched beforehand, at least preliminarily.

On the parlor floor we planned to use pre-existing doors and only one door had to be be newly hung.

For the newly constructed rooms on the garden floor we had to make some decisions. Researching online wasn’t much help because it is hard to find a source that breaks them all down and shows illustrations.  Most informational sites are companies trying to sell their own products so we went to Dykes and had the guy there explain door construction to us.  As with all construction decisions, there is an overwhelming amount of information for doors and the different companies that make them, which in turn makes it hard to compare the prices for different companies.

Anatomy of a Door

Most doors are made of stiles, rails and panels.  Before you decide what kind of door you want it is best to decide how you want it to look.  We wanted four panel doors to match the pre-existing doors to our junior bedroom.

Panel doors contain patterns of square or oblong panels and are a classic choice. A door may contain two large panels, six small ones (above left) or some other configuration. Flush or flat panel doors are smooth on both sides and offer contemporary style i.e. boring.

Basically, we were looking at four types of doors that are broken down into categories based on their interior substance.

Hollow doors:  these have a hollow center that usually consists of a lattice, honeycomb made out of corrugated cardboard or something similar.  These are the interior doors you find in a lot of rental apartments.  They are the cheapest and in our opinion best used for closets where you don’t need sound dampening properties.

Solid core:  these consist of low-density particle board or foam that is used to completely fill the space within the door. These are the next step up in price and provide a lot more sound insulation than hollow doors.

Solid wood:  as their name suggests, these doors are made from solid wood.  The panels are thinner and are often made from wood veneers.  Some companies provide an engineered wood core in certain parts of the door to prevent the expanding of the wood as temperatures vary.

Medium Density Fiberboard (MDF):  these doors have a solid MDF core.  They are a little more expensive, which is surprising as I would have thought wood would be the most expensive.  This is because they are not susceptible to warping due to temperature changes so you won’t get doors that stick in the summer because they have expanded in the humidity.

We eliminated hollow core doors first because we’ve both had them in crappy apartments and hated their cheap look and feel (but we have one for the bathroom in the rental unit! We are shameless landlords already).

We chose doors from Lemieux Doors, a Montreal based company.  In the end we chose wood doors because a) they could get them in less than two weeks, and b) because we like the look and feel of wood.  They are made with engineered stiles so they are guaranteed not to split crack swell or shrink, according to the website.

They arrived last week and some of them were installed today.  For the bedroom closets we chose single panel doors. 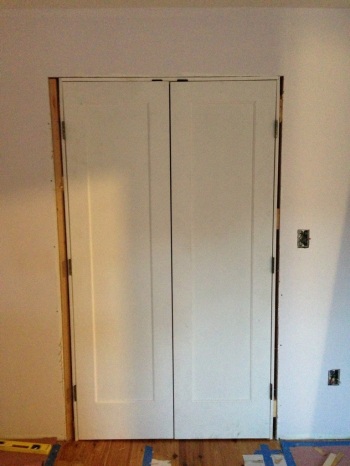 For the interior room doors we chose four panel to match the original pre-existing doors in the junior bedroom.

Now we just need to pick out our door knobs and its on to picking out molding for the new door frames.